You are here: Home / Tables / The Golden Egg 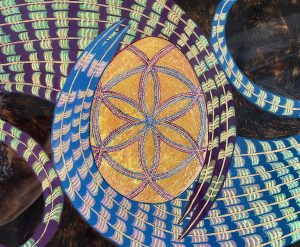 With lines representing the DNA double helix, blue dots appear in the purple squares and purple dots in the blue squares, illustrating the mixture of the DNA from two creatures.

The DNA moves inside of a golden egg, forming the sacred geometry “the Germ of Life”.

For thousands of years and all across the world, the egg has been a powerful symbol for the Earth, fertility, and resurrection. Ancient people believed that the world was formed from a cosmic egg. Rites and rituals have been performed using eggs as a sign of life after death, fertility, light, and new growth.

The golden color gives it an even wider meaning, adding illumination, sacredness, and durability. It is associated with the sun, and embodies the powers of the Earth. It also symbolizes the highest stage in spiritual development.

Two colorful birds become one in the golden egg – for centuries, birds have symbolized life, death, the future, the past, enlightenment, as well as the connection between the human world and the spirit one. Because they travel across the sky to distant places, they have been regarded as predictors of future events and messengers from the Creator.

The egg and the birds are depicted upon a round table with a black base. The circular form represents totality, perfection, infinity, perpetual motion, eternity, timelessness, wholeness, cyclic movement, the Self, the God, and the embryo. A black circle represents the ending of a cycle and the preparation for the beginning of a new cycle, a transformation and the emergence of a higher self, the end of the process of individuality, and the strive towards wholeness and self-realization.

The message of The Golden Egg is to become ONE.

Humanity has been given golden opportunities to realize that all our actions affect each and every one of us. It is time to start a new cycle, a cycle of wholeness, where our actions are based on the thought that YOU are I, and I am YOU, where we start loving our one self. Let our experiences give birth to a new life as we become one.