You are here: Home / Tables / Passion Vs Reason 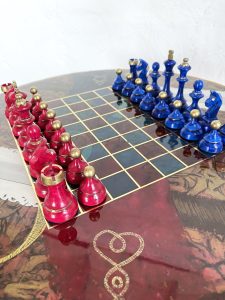 I was born in northern Mexico, but when I was ten years old, my mother got a good job offer in Mexico City. She and my father moved down there to get housing, schools and other things sorted for our new life in the capital, while my siblings and I stayed behind for another six months. We spent this time living with our Grandpa and Grandma, who taught us how to play board games. One of my strongest memories is from when Grandpa taught me how to play chess, and we spent our evenings filled with classical music, chess and Piccolo (Grandpa’s Dalmatian).

When my husband was young, he competed in chess. When we met, and subsequently played together, he made me realize that chess can be played with either “aggressive” or “defensive” strategy. It is certainly one of the reasons why chess has often been used as a symbol of the struggle between good and evil, life and death, black and white, intelligence and madness, passion and reason.

We all have periods in life where we have made decisions following either our heart or our brain. One might think that the best thing is to always follow what the brain and reason tells us – however, if that were the case, I would have never ended up in Sweden with a Swedish husband, as my brain was telling me that this would mean leaving all of my family, friends, possessions, contacts, etcetera, back in Mexico and facing an uncertain future without them by my side… It was a battle between heart and brain, where the heart won out – which in this case led to a great reward in the form of love, children, new friends, career, possessions, learning and growth.

Passion VS Reason is a chessboard that symbolizes the battle between these choices of strategy we make in life, sometimes they lead to profit and sometimes to loss. 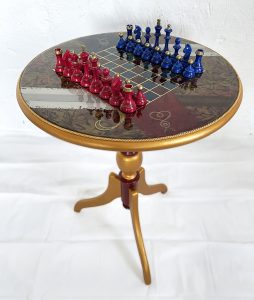 The tabletop was painted with a base of pink and gold metallic color, and brown lines in acrylic. This background represents the battlefields. I then poured a layer of transparent epoxy and set the table aside for some time while I made sketches for the motifs that would symbolize “passion” and “reason”. 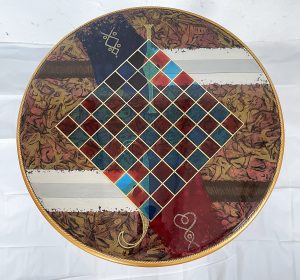 “Passion and Reason” were to have the same weight, the same opportunities, the same weapons, but different characteristics. Both are represented by one hand (the one who acts), both hold a sword (the power to act), and both have details in gold (symbol of wealth).

“Passion” is depicted on the side of the table which has the red hand. The red color stands for warmth, blood, and passion. The area also contains many curvy lines and shapes, to make this side feel more soft and flexible. The sword’s handle has diagonal lines carved along it, meant to represent alternative paths in life. On the back of the hand, there is a symbol consisting of a heart, more curvy lines, and a circle. The heart is there as a symbol for passion, and the circle represents balance within oneself, as it is located between the curvy lines that extend from the heart.

“Reason” is depicted on the opposing side of the table, where the blue hand is. The blue color stands for cold, nerves, brain, and reason. In contrast to the side of Passion, this area has straight lines rather than curvy ones, which stand for stability and rigidity. The sword’s handle also have straight lines carved into it, meant to represent safe roads. On the back of this hand, there is a symbol consisting of squares, more straight lines, and circles. The squares are tilted, giving their angular lines the appearance of arrows pointed straight at a target. The circles represent balance in the outer world, as they are located on the outside of the squares.

Both hands holding the swords have a worn look, to represent the wounds caused by the battle. The table consists of six layers of epoxy onto which acrylic paints, epoxy paints, and metallic vinyl have been applied.

The table base and the rim of the table top were painted in gold acrylic and protected with varnish and red lacquer. The chess pieces were bought and repainted in red and blue acrylics, golden details were then added with a permanent marker, and finally they were given a coat of varnish.